Stonethica is a project with solid and serious principles so when we talk about nature and circular economy we cannot do it without an adequate recognition.

Thus the most important institutions were chosen for the terms of certifications and awards to give the project an important support.

Bureau Veritas is a French company of global relevance in the assessment and analysis of risks related to quality, the environment, health, safety and social responsibility (summarized by the acronym QHSE-SA, Quality, Health, Safety, Environment and Social Accountability).

The group provides services for conformity assessment and certifications regarding quality, health, safety, the environment and social responsibility in all sectors, both public and private, from industry to services.

Its main activities are the inspection, verification and certification of assets and facilities, projects, products and systems, with reference to internal standards, to mandatory and voluntary national and international standards and provide a compliance report.

GREENiTOP® is a project aimed at professionals in the “GREEN Buildings” sector, which brings together Italian companies in possession of products with “green” certified characteristics.
With the term “green” , we mean those products with internationally recognized environmental requirements, for example according to the ISO14020 Environmental labels and declarations – General Principles standards to which the main building sustainability certification protocols and national regulations refer.

Following the attestation of these characteristics through a verification of the specific documentation, the “GiT Product Badge” is used in order to identify the product in the portal with a unique code.
Each identification code also refers to a certificate, which describes the environmental performance of the product or products analyzed, thus offering a powerful marketing tool for companies, in a saturated landscape of DIY green labels.

The analysis and attestation process is guaranteed by an independent Advisor, through its own qualified personnel and in compliance with the UNI CEI EN ISO / IEC 17024 standard “Conformity assessment – General requirments for bodies operating certification of persons’’.

GREENiTOP® operates as a sort of “virtual assistant”,for profesisonals related to the Green Buildings sector, looking for Italian companies with products with certifications and “green” features required by international rating systems, with particular reference to the LEED rating system ™, but also FSC, PEFC, GreenGuard, Geca etc.

In addition, each GiT product will also be visible within the GreeniTest app, developed thanks to the collaboration with GreenDesign LabPlus of the University of Ferrara. 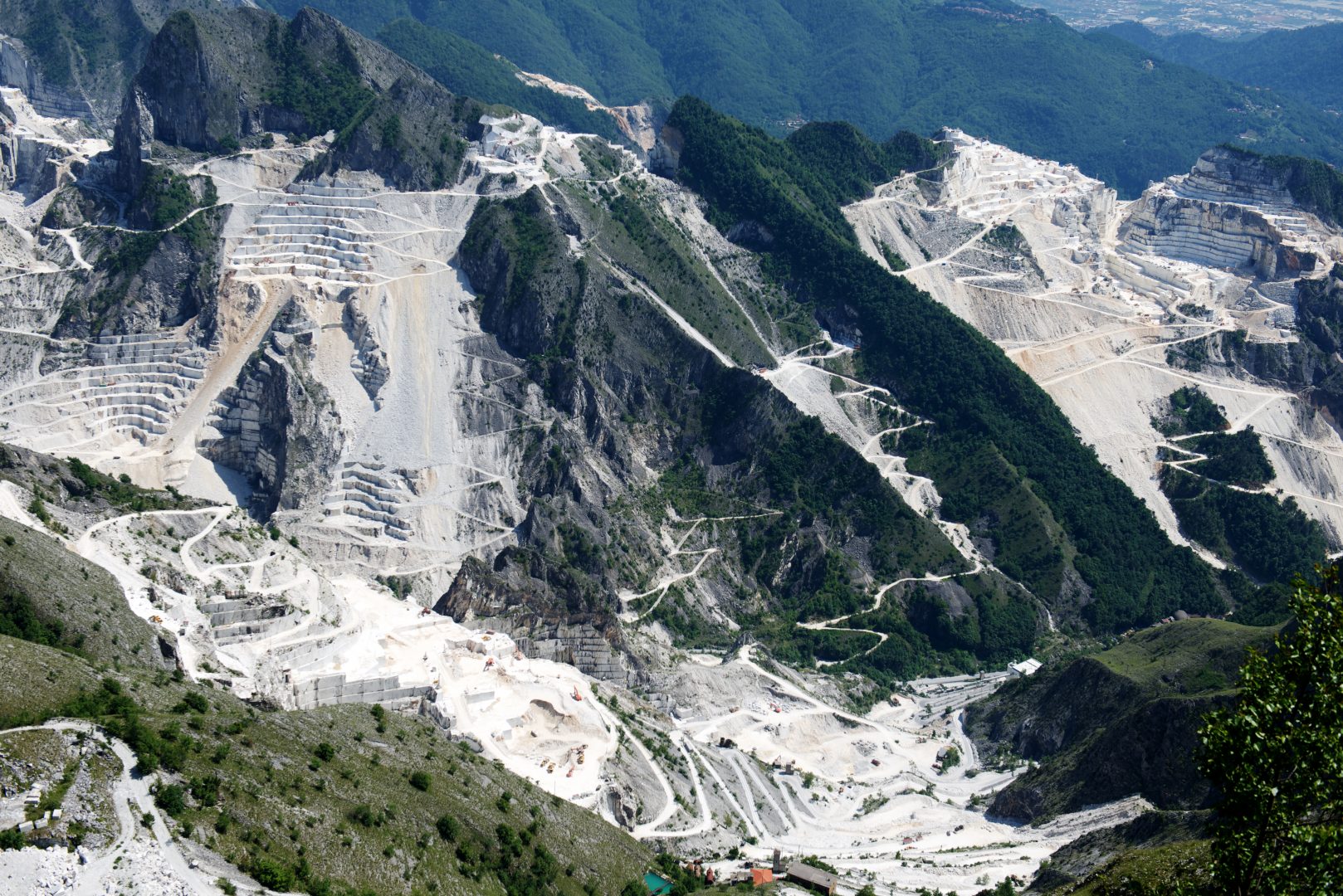 The Apuan Alps is a territory that needs to be protected and known in all its aspects; marble is a concrete resource, a territorial asset that must be understood and respected. From Canova to Michelangelo the greatest sculptors who have ever lived have passed through this territory to find inspiration.

The marbles of the Apuan Alps are probably the most famous stone material in the world. Up to 14 product varieties have been recognized and grouped according to their characteristics into 5 groups: white marble, brecciati marbles, gray and veined marbles, cipollini marbles and historical marbles.

The beginning of the excavation of marble in the Apuan Alps is well documented in Roman times, but recently, some studies have confirmed that the processing of this marble started in pre-Roman times for funerary artefacts. A first intensive excavation activity was recorded during the first century BC; in fact, after a renewal of public and private architecture in Rome there was a considerable increase in the production of marble that was extracted, for the most part, from quarries placed at the bottom of the four main carrarese marble basins (Boccanaglia, Torano, Miseglia and Colonnata basins).

At the time all the phases of the extraction activity were already accurately planned: the extracted material underwent a first processing directly in the quarry, while the wastes were used to construct the “Vie di Lizza” on which were sent down to the valley the marble blocks.

Today the number of active quarries in the main mining areas (Carrara, Massa, Lunigiana, Garfagnana and Versilia) is 143, of which 100 are concentrated in the Carrara basin. The amount of material extracted in blocks is around 400,000 cubic meters per year, employs about 6,000 workers and represents 70% of the provincial GDP and one of the most important and prestigious sectors in the economy of central Italy. Another important business line consists in the production of calcium carbonate, a fundamental raw material for the production of plastics, rubbers, tires, insulators, paints, glues, paper, chemical, pharmaceutical, cosmetics and building products.

This website uses cookies to improve your experience while you navigate through the website. Out of these cookies, the cookies that are categorized as necessary are stored on your browser as they are essential for the working of basic functionalities of the website. We also use third-party cookies that help us analyze and understand how you use this website. These cookies will be stored in your browser only with your consent. You also have the option to opt-out of these cookies. But opting out of some of these cookies may have an effect on your browsing experience.
Necessary Always Enabled
Necessary cookies are absolutely essential for the website to function properly. This category only includes cookies that ensures basic functionalities and security features of the website. These cookies do not store any personal information.
Non-necessary
Any cookies that may not be particularly necessary for the website to function and is used specifically to collect user personal data via analytics, ads, other embedded contents are termed as non-necessary cookies. It is mandatory to procure user consent prior to running these cookies on your website.
SAVE & ACCEPT